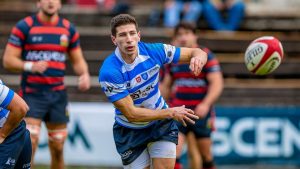 Pedro Lucas, a student of Electrical and Computer Engineering at Técnico, is one of those summoned to fight for the qualification of the National Rugby Team for the 2023 World Cup in France.

The Técnico Rugby Club player had already been called up to the Portuguese Rugby Team in November 2019. His debut with the “Lobos” shirt would take place a few months later, in February 2020.

In addition to Pedro Lucas, there are more names linked to Técnico in the “Lobos” team. Raffaele Storti, an Engineering and Industrial Management student, and two Técnico alumni, Jerónimo Portela and João Granate, are also part of the squad that will give everything to make history and win this the ‘race’ to the World Championship.