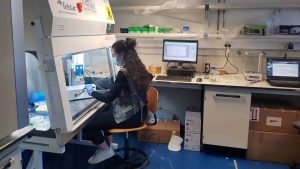 But it could become a reality. Or at least that’s what 4 Técnico scientists want to find out.

The Algae2Fish project, composed of 4 researchers from the Institute of Bioengineering and Bioscience (iBB), aims to produce the first complete in vitro fish fillet through 3D printing. Developed based on sea bass stem cells and seaweed extracts, the fillet is intended to be similar to what we are traditionally used to eating.

Led by Professor Frederico Ferreira, professor at the Department of Bioengineering (DBE), the project recently won one of the 21 grants from the Good Food Institute, securing funding of 215,000 euros.

If you’re already curious about tasting this fillet, you’ll still have to wait a bit. The project started in December 2021, but only “in 2 years will the fillet prototype be optimized and can be tested by a panel of people”, as revealed by Diana Marques, a master’s student in biotechnology at Técnico and who is part of the research team from Algae2Fish.